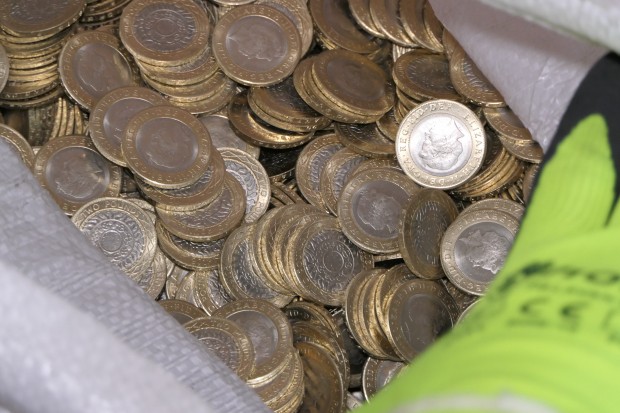 2 euro counterfeit coin shop opened by employees of the State Security Service in Plovdiv
The counterfeit coin shop, which was smashed by the DGBOP, is located in Plovdiv. He was positioned in an outbuilding. From there, various types of presses for cutting and manufacturing blanks and dies for them were seized. More samples of counterfeits, cell phones, tablets and foreign coins of different denominations were seized. A 2 euro coin stamp was also loaded into the machines.

The specialized operation was conducted on May 13 in the territory of Sofia and Plovdiv region. The action, under the leadership of the Specialized Prosecutor’s Office, involved employees of the State Security Service. An organized crime group neutralizing the production and distribution of fake coins in Plovdiv has been neutralized in the course. The implementation was carried out jointly with the UK services. In the course of the investigation into information received from the DGSCOP, the group was found to have been operating since the fall of 2017. As a result of the professional actions taken, the employees of the DGOCOC detained three participants in the group at the time of the purchase of a large quantity coins.

During the operation, three addresses and three motor vehicles were checked on the territory of Plovdiv, as well as one address in Sofia.

This is the first case in which 34,000 coins with a denomination of 2 British pounds of extremely high quality and the complete equipment for their production have been detained, said the administrative head of the Specialized Prosecutor’s Office Ivan Geshev. He explained that legal aid was being sought to clarify whether such lots had already been realized in the UK. The cost of selling counterfeits is 40% of the face value. Using the full resource of the technique, the production capacity per day can reach 1,500 coins.

Three were charged under Article 321 of the Criminal Code in connection with Articles 244 and 244 of the Criminal Code. Two were imposed a bail bond of BGN 5,000 and the third was a permanent detention measure. The fourth member of the group was a Turkish national who was abroad at the time of realization. Pre-trial proceedings are ongoing.