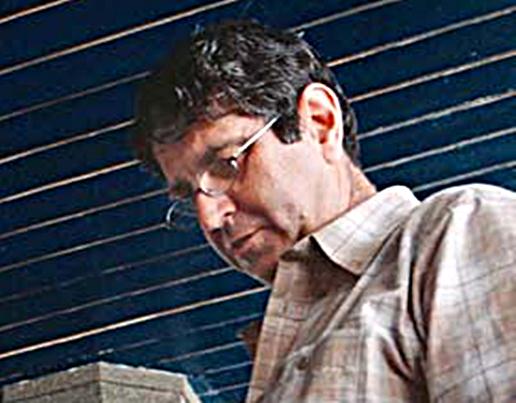 Nightingale is the most popular but not the best counterfeiter in Europe
Nightingale makes two copies of a rare Roman coin. They are made as a golden souvenir ornament. They went through 2 3 owners, then sold as originals in two different places, one abroad. In general, when counterfeit coin is sold, fraudsters develop a complex scenario to capture the victim. In this case, one coin is inserted into the collection of a deceased Bulgarian collector known before 9 September, and then his grandson (with whom everything is arranged in advance) offers coins from his grandfather’s collection. On the fishing line is caught the famous collector Bai Iron Emperor, today also deceased. The catalog price of the coin is fantastic because of its rarity of about $ 100,000. It is not known exactly what was marketed here, of course, far lower than the catalog. The other specimen was sold with a similar scenario to a Yugoslav collector, who in turn sells it in Germany, where the owner doubts over time and with the help of experts make a serious analysis. As the author of the copy saw the coin only in the photograph face and back, he was not able to achieve with complete accuracy only the relief of the image in depth (it can be captured if the coin is seen sideways). Thus, the coin is found to be counterfeit. The Bulgarian investigation is “sent” from abroad and interrogates Slavey, Bai Zhelyazko and others.

There is already some cult in Bulgaria for making copies of antique coins and valuables. Along with Slavey, many of his followers, imitators, people who cut coins and try to sell them here and abroad, were born in Bulgaria. Some compete for the title “better than Nightingale”. 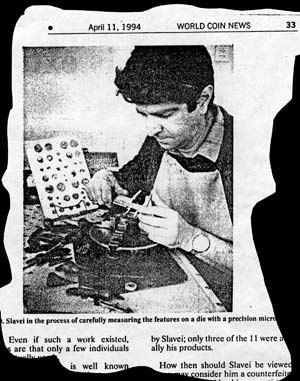 The Nightingale article in Coin World, 1995.
It is precisely because of the mastery of copies of antiquity that socialism begs another myth. It is unknown to anyone in the state protocol during Todor Zhivkov’s time that the idea was to make copies of the Panagyurishte gold treasure and to give heads of state or high guests to the first person in the country. It is unknown today which copies were gilded, which ones were made of pure gold.
But when such gifts were handed out, on one occasion and another, casual witnesses were seen to be giving away “that thing of the Panagyurishte treasure” that is known from the photos. And so the rumor goes that gradually the objects of the Treasure of Panagyurishte were donated by Lyudmila Zhivkova, by her father, etc. This rumor is periodically awakened by some yellow newspaper for 10-15 years after the fall of Zhivkov.
But among the copyists in Bulgaria, the most famous is Slavey with his coins.
About 15 years ago, a large amount of small silver coins (obolos) of Mesamvria and Apollonia gradually appeared in Europe and the USA. They are auctioned, are in private collections and museums. It turns out that this is a whole series of fakes made in Varna, probably with Slavey matrices. In the 1990s, enterprising people bought matrices and produced from it… Western experts in many cases made it difficult to evaluate due to the high quality of workmanship. About a year after this type of flash flood flooded the western market, an American museum expert visited Bulgaria. From a stand at the entrance to the National Museum of History, where copies of coins are also being sold, the American buys several of these wallets, of course, accompanied by the note that these are copies. When he arrives in the US, he publishes photographs of the coins and an accompanying note in an American numismatic magazine to warn the numismatists that such copies are sold freely in our country. Then many people notice that they have mints in their collections.

“They sell coins and antiques abroad on my behalf. They present them as copies made by me – Slavey copy writes next to the photo. But these are not my things, ”says Slavey. He himself makes and sells official copies, has his own booth in Munich, and has regular customers. They are also looking for custom coins for avid collectors who want to have their profile displayed on a coin.
“From each coin I select the most beautiful and invest from myself. My coins are copyrighted. I make interpretations, an improved version of what the ancients did (laughs) … I’m like a musician – I take a piece and play it, “my passion for Nightingale explained. 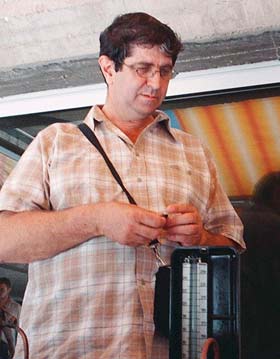 An ancient Greek coin, a copy of Nightingale. Photos: Ivan Bakalov
Finding counterfeits on antique coins when minted with another coin of the same metal and of the same era is very difficult. Only a microscopic comparative analysis of the structure of the metal can prove the differences. This is exactly the expert Nightingale.
In addition to being a copyist, his fame is that he is also one of the largest coin collectors in Bulgaria. So great a connoisseur that they seek him for advice here and in the West. It has come to this point that a rare antique coin in our country, if he does not see it to give his opinion, cannot be sold.

Why is the Bulgarian so famous? The fashion of making and collecting copies of antique coins appeared during the Renaissance when an unprecedented interest in antiquity erupted. It was no longer a question when there was an unprecedented interest in antiquity. It was no longer a matter of forging money, but of making a craze. Passionate collectors of numismatists were Michelangelo Buonarotti, Emperors Charles V, Spanish King Philip II, Catherine of Medici and others. Engraving masters have focused on making copies of rare coins. The pioneers in this activity are the three masters who created the so-called Padua School – Giovanni Calvino (1500 – 1570), Vitore Camelio (1460-1537) and Alessandro Basiano.
The legendary engraver / counterfeiter is the German Karl Wilhelm Becker (1772 – 1830). He was in the swing – he made Greek, Roman, Thracian coins, forged unique French kings, money of German emperors and more. By the mid-nineteenth century, most European museums had counterfeits. In the last years of his life, the legend of the fine and devoted artiste the copyist whom greedy merchants malign by selling his copies for originals was created for him.

Perhaps only after a man has heard of Becker can he evaluate the Slavey phenomenon by reading how he is evaluated in the West: “Some antique dealers claim that Slavey Petrov is at all the best master of copies of antique coins, even better than 19th-century counterfeit Karl Wilhelm Becker… A book of photographs of his works must be written for Nightingale… ”This was written by the numismatic Coin World 13 years ago.

Roman den, a copy of Nightingale. Photos: Ivan Bakalov
“Nightingale can take its place among other masters in history who have made exceptional copies of ancient coins, such as Giovanni Calvino (sixteenth century), Karl Becker (eighteenth-nineteenth century) and Constantine Christodoulos (eighteenth-nineteenth century),” he writes. World Coin News magazine in an essay on Bulgarians. Coins of Becker, Christodulos and others. Auctions in Europe have reached prices higher than the originals. Even the living classic Slavey Petrov boasts that for his copies of Syracuse tetradrachms, for example, in the West, collectors paid 1000-2000 euros – a price equal to, even higher than some types and qualities of originals.

This is the story of Slavey from Haskovo. He has no competition around the world. Only here. There is no one in the West who does such a thing, experimenting with such things for 20 years, until he learns and becomes a master. “Who will feed him such a person, who will invest in him, say 15 years without knowing what will come out in the end?”, Says Slavey.

I asked him exactly how they handled his copies in order to try them as originals. He answered with a laugh: “To let them know what they are knocking, holding and tugging at. Counterfeit is always dirty, crippled, patronized, looking more authentic, just dug. While the original is always clean, polished (laughs). In the clubs, I see occasionally showing a dirty coin, and I find it funny. ”

Tensions with his name dropped significantly after the mid-1990s, when Bulgaria opened, numismatists came here to see what Slavey did, and he began traveling to Europe, officially selling replicas, consulting numismatists. It now has its own booth in Munich and its own site – slaveycoins.com.