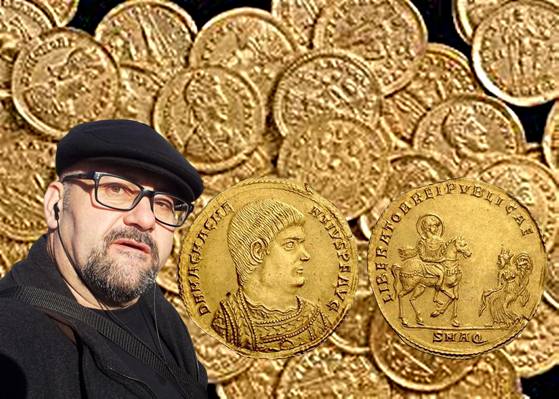 Stefan Proynov: When coins say one thing and history proves another. Coins were the media in antiquity and they commercially spread the fame of emperors and kings around the world.

They often told of events or megaprojects in the architectures of army victories and naval odysseys, they are the ones through which emperors speak to their subjects through coins, but there are some specific denominations called Medallions, which were distributed to those close to the emperor for their loyalty. 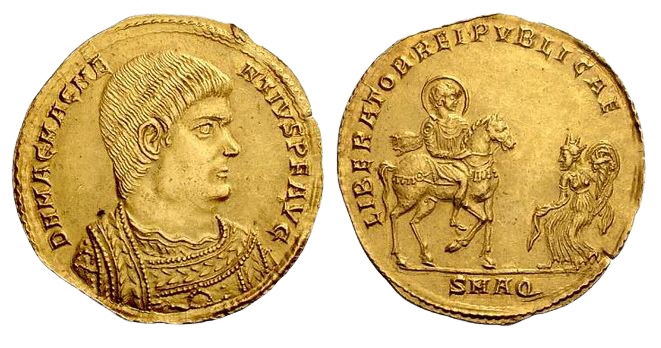 Stefan Proinov: I present to your attention a medallion of Emperor Magnetius from 350-353. What does the coin tell us? On the obverse – the obverse there is an inscription “D N MAG MAGNE – NTIVS P F AVG” AVG is introduced by Octavia August and is considered a title meaning “Father of the Nation”. Here, however, it is striking that Magnetius wore a Consular tunic, not imperial armor or imperial clothing. Most experts describe him wearing an imperial robe, but I would argue with them. On the reverse – the reverse side is written LIBERATOR-REI – PVBLICAE Magnentius, is in military attire, on horseback. Offering his hand to a draped figure of Aquileia holding a horn of plenty. Here we have another message referring to that period, which can be mistakenly paraphrased today “horn of plenty” as it is a symbol of fertility, wealth and grace, which dates back to from the 5th century BC and derives from ancient Greek mythology, and in particular from the myth of the goat Amalthea, who nursed the god Zeus with her milk in a cave on the island of Crete. After Amalthea breaks one of her horns, Zeus makes her a new, golden horn as a token of gratitude. Here the emperor tries to instill that he has wealth.

We all know that there was high inflation at that time and the salaries of soldiers and officers were paid in large quantities of small copper coins. Stefan Proynov: The analysis of the coins from this period shows that the quality of the metal has deteriorated, which in practice shows that the emperors did not have the money to regularly maintain the salaries of the army and their officers. In practice, the medallions are intended only for those close to the emperor and his loyal generals. Everyone knew that copper coins were not worth it, so they preferred to pay them in gold and silver. The third proof is the weight of the medallion.

It weighs 13.70 g. equal to three solids and has a size of 37 mm. Practically a shallow image as thin as a large diameter. This is more to seduce the eye than to be a generous retribution.

In practice, this is an additional salary which is given an occasion and solemnity. Today, however, such medallions sometimes sell for millions of dollars.

Stefan Proynov: The month of May is filled with unique coins that compete in auctions around the world.

Stefan Proynov, expert in ancient and ancient art: I hope I have been useful to you, if you are satisfied please share this information with your friends!