Stefan Proynov: It may turn out that we have processed the oldest iron in the world!

Stefan Proynov: Once we have processed the oldest gold, it may turn out that we have also processed the oldest iron! A sword about 5,000 years old has been found in a Venetian lagoon at the Mkhitarist Monastery on the island of San Lazaro delle Armeni, according to Ca-Foscari University in Venice. The oldest sword was kept in a cabinet for medieval artifacts. He was spotted by ancient weapons specialist Vitoria Dal’Armelina of Ca-Foscari. 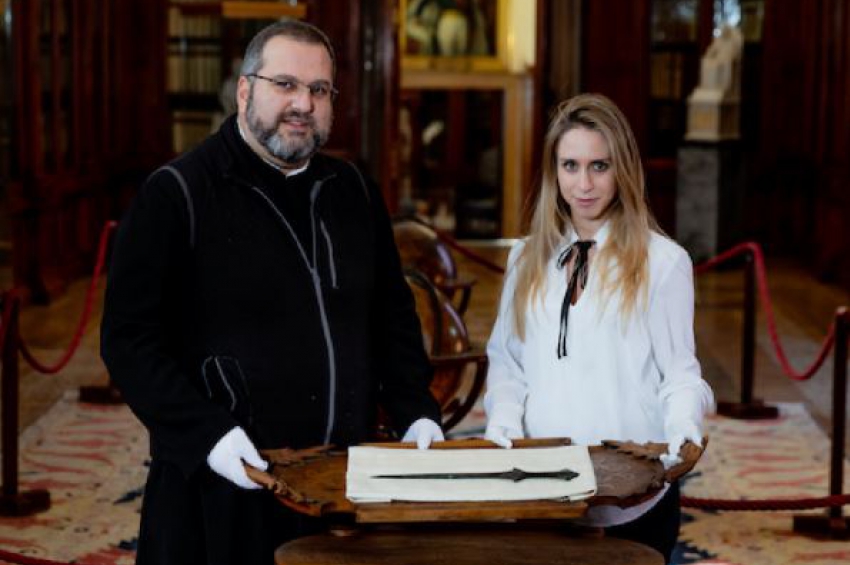 The sword is mistaken for a medieval one. Scientists have analyzed the metal and date the artifact to the third millennium BC. According to recent studies, this type of sword is common in a relatively small region in eastern Anatolia, between the Euphrates and the southern coast of the Black Sea. Additional analysis will help determine the exact location of metal mining. There are no inscriptions, ornaments or remarkable details on the sword.

Most likely, it was part of a funeral and accidentally landed on the black market, researchers say. The sword was forged at a time when a large number of weapons and other valuables were placed in the Anatolian and Caucasian funerals of the military elite. Scientists have not yet solved the mystery of the unexpected find.
According to Stefan Proynov, an expert in ancient and ancient art, this sword belongs to the so-called Akinak – a straight double blade without a groove with a length of 35 – 45 cm. The Aquinas were characteristic of the territory of Northern Thrace until the 4th century BC, when they were almost completely replaced by the Mahayrata and Xiphos. Numerous archeological finds and images prove the widespread use of Aquinas swords among the Scythians.

According to Herodotus, the Scythians worshiped an iron akinak placed on top of a wooden platform, as the personification of Ares, and offered human sacrifices to him. In ancient Thrace, the distribution of short akinak swords dates back to the Bronze and Early Iron Ages. The iron dagger with a gold sheath on the scabbard from Belogradec (duplicated by the image on the tombstone from the same burial), is a typical example from the VII century BC.

The real akinak penetrated into Thrace after the 6th century BC. probably under Scythian influence and spread mainly in the North Thracian lands (present-day Romania and Northern Bulgaria). After chemical analysis of the metal, it can be understood in which part of the world the ore is mined, because it remains a specific identification of the chemical composition. As with damask steel, for example.

Stefan Proynov claims that a large number of Aquinas found in Bulgaria enter the Western markets, presenting them as a Scythian short sword because of the higher price that traders can get. But he suggests that it is this sword that is very likely to originate from our North Thracian lands, and he jokingly adds that since we have processed the oldest gold in the world, why have we not processed the oldest iron? We observe this style in both the Persians and the Whales, and where did they borrow it from?
Stefan Proinov: Nobody asks the question with what tools he processed the Varna Chalcolithic treasure