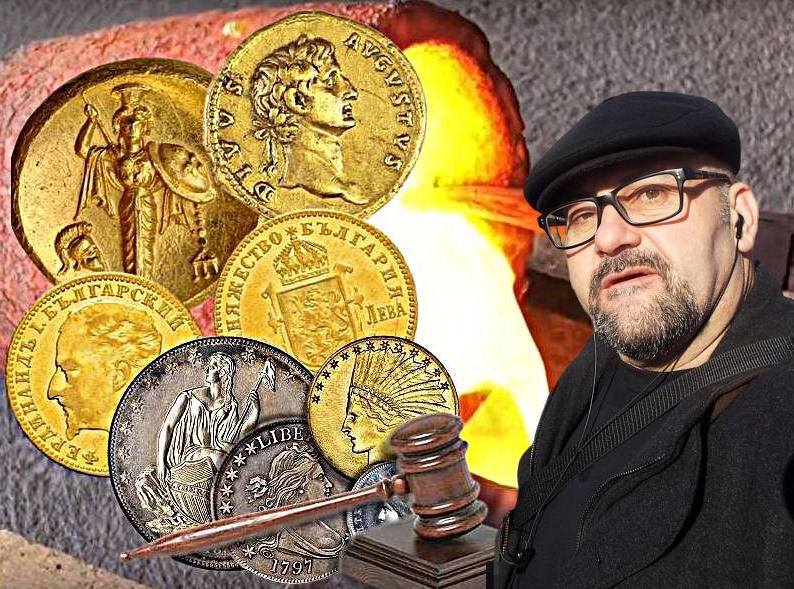 Stefan Proynov: Numismatics is a science that studies the history of coins and means of payment in general. The word also means the science of coins as historical sources and is therefore an auxiliary science of history and archeology, because coins in turn help to more accurately date certain historical events or archaeological excavations. Banknotes, orders, medals and badges are also objects of numismatics.

Numismatics is also called coin collecting as a hobby, which has made rare coins very expensive and has turned numismatics into a serious business. Collecting as a hobby and coin trading are most developed in the United States, and despite the short history of the United States, American coins are particularly valuable and sought after. Their prices in perfect quality range from tens of thousands of dollars to millions in the case of great rarity. Coins minted in the Roman Republic are especially valuable and in demand, especially those minted during the Roman Empire, due to their rarity and variety, as well as the plots they reflect are very interesting.

Roman coins have those of greater collector’s interest, such as the so-called Medallions, which are struck at an event and reflect accurate historical events. Ancient Greek coins are filled with images and characters from legends and myths, they ignite more mystical passions in collectors, which makes them more sought after, and archaeological discoveries continue to surprise collectors with the discovery of increasingly interesting facts and coins.

Coins minted during the Byzantine period are also interesting in terms of historical events and events as they are rougher and do not have the beauty of their predecessors, but are in high demand because of their lower value and great variety. Of course, a lot can be said about coins, because they are a vivid image of political and economic events from a certain period of world history.

Every ruler and every empire has left a clear imprint on its own type of coin. This gives a huge field of action to numismatists and everyone chooses what coins to collect and the more complete a collection is, the more it gives a clear idea of ​​the topic on and the period on which it is based.

The truth is that over the centuries coins have had no numismatic value, and their value was based mainly on the metal from which they are made. It has been a common practice for coins from previous empires to be melted down and minted in the image of a ruler, so in practice small runs contribute to higher prices in numismatics today.

Until a few decades ago, however, our goldsmiths and jewelers melted many antique and medieval coins as well as coins from the Kingdom of Bulgaria, turning them into jewelry. Ignorance is not an excuse for an act.

Stefan Proynov: How many treasures and coins have been melted down?