Stefan Proynov: The History of the First Bulgarian Banknote

Stefan Proynov: On August 1, 1885, the first twenty-page book was printed. This is the first gold issue of Bulgaria and, as can be read on the banknote itself: “In exchange for this banknote, the Bulgarian National Bank pays the bearer twenty levs of gold.” The 20-year-old with serial №000001 is still kept in a museum in Gabrovo, although it has a torn corner. 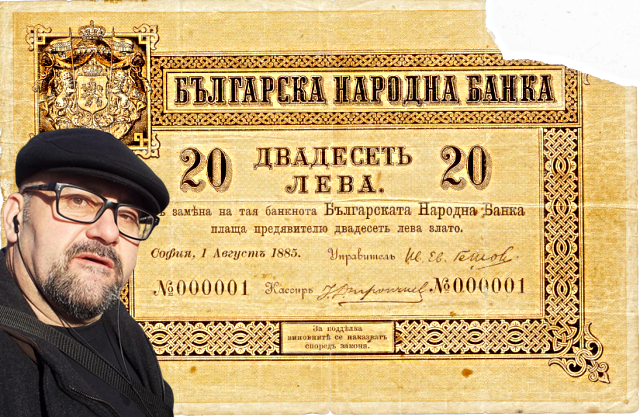 The reason she is right there is that it was a man from Gabrovo who “saved” her. The valuable find fell into the hands of Gabrovo resident Vasil Tyulumbakov at some point, and after his death he bequeathed it to his son, who was a teacher. They are both aware that this is a valuable find because they have noticed the serial number. Thus, the first Bulgarian banknote was handed over to the Regional Historical Museum of Gabrovo. The exact word was not given because the teacher received BGN 250 for it in the distant 1961.

Stefan Proynov: Today such a banknote is traded on the market between BGN 5,000 and 6,000, but the one with this serial number would cost much more. The first banknote differs greatly in format, protection and design from current paper money. The state coat of arms is depicted in the left corner of its obverse, and two Russian words are read in the inscriptions. There are no images of great people or paintings on it. Our banknotes acquire such artistic value later.

And the decision of who will be depicted on the banknotes of different denominations is not easy. Until now, the BNB Governing Council has appointed the so-called Art Council, which consists of artists, historians and artists. They determine the personalities whose images will appear on the money. Thus on modern banknotes we see the faces of historical and spiritual figures even. Stefan Proynov: