THE GREAT SCULPTURES Aphrodite of Cnidus 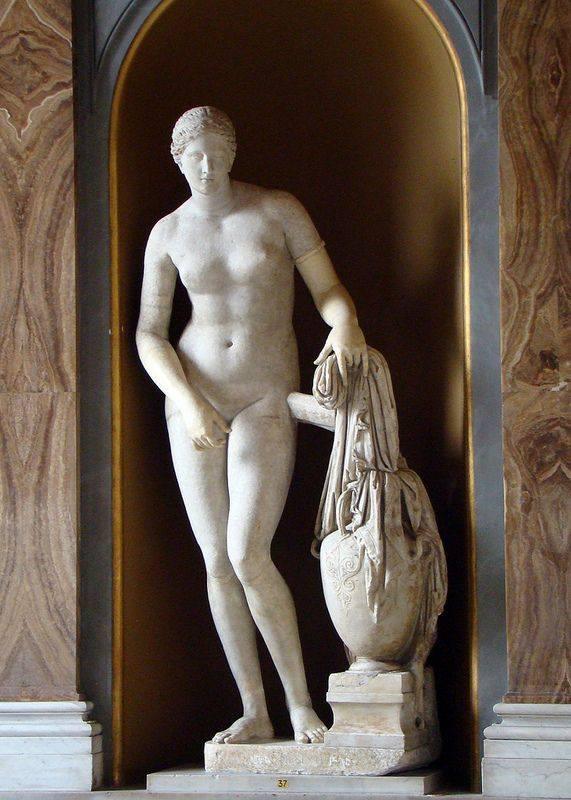 Aphrodite of Cnidus ”(Greek: Κνίδια Αφροδίτη Πραξιτέλη) is one of the most famous sculptures of the ancient Greek sculptor Praxiteles. The original has not been preserved, but there are numerous copies. Aphrodite of Cnidus is the first full-size sculptural image of a naked female body in ancient Greek art. It depicts the goddess of love Aphrodite and was created around 340 BC. The height of the sculpture is 2 m, and the material – Paros marble.
According to Pliny the Elder, the statue was originally commissioned for the local sanctuary by the inhabitants of the island of Kos.

A practitioner created two sculptures, of a clothed and a naked goddess. Kos residents are shocked and prefer the traditional version. Subsequently, this statue has not been preserved. Later, the naked Aphrodite was bought by the inhabitants of the city of Knidos in Asia Minor. Numerous pilgrims began to flock to the city, attracted by the sculpture that stood in the temple under the open sky.

Nicomedes I of Bithynia offered to forgive the inhabitants of Cnidus a huge state debt in exchange for the statue, but they refused. During the Byzantine Empire, it was moved to Constantinople, where it was probably destroyed by fire in 475, along with other examples of ancient art.

It is believed that the Athenian heterosexual Phryna served as a model for Aphrodite of Cnidus.
The statue gained great popularity and was copied many times, and many derivative versions were created. Numerous descriptions and about fifty ancient copies have been preserved. The replicas are best preserved in the Glyptothek in Munich and the Vatican Museums, as well as the torso in the Louvre.

The most accurate copy is considered to be “Venus Colonna” in the Pio-Clementino Museum in the Vatican, as well as the statue in Villa Adriana in Tivoli.
And the ancient city of Knidos was located at the end point of the 100-kilometer-long Datca Peninsula, starting from today’s Marmaris in the direction of the island of Rhodes.