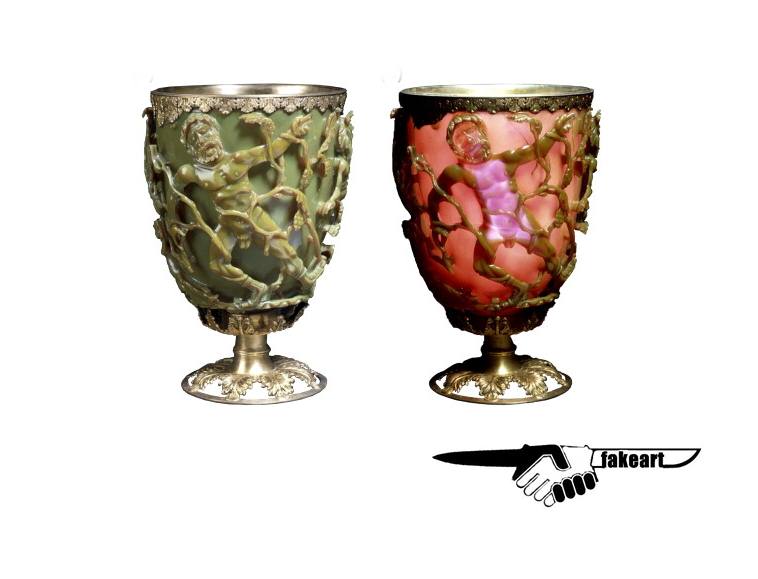 Thracian cup The British Museum has a unique exhibit. At first glance, this is an ordinary antique cup. This cup is made of glass. It is 158.8 mm high, 132 mm in diameter and weighs 726 g. The cup is in the shape of a goblet. It was made in the 4th century AD in ancient Rome.

It is called The Lycurgus Cup because it depicts a mythological scene with the Thracian King Lycurgus, who offended the god Dionysius and therefore he punished him by suffocation from a vine. The cup was originally acquired in 1845 by Baron Lionel Nathan de Rothschild. In 1958, the British Museum purchased the glass from his successor, Victor Nathaniel Meyer Rothschild. The glass looks like green jade when lit in front. However, when illuminated from behind, it acquires a blood-red color. This fact has long puzzled scientists. It was not until 1990 that the mystery was solved.

English researchers carefully examined fragments of the glass under a microscope and found that ancient Roman artisan glassmakers were pioneers in nanotechnology. They impregnated the glass with such fine particles of silver and gold that they were about 50 nanometers in diameter. Under the influence of the sun’s rays, the electrons in the metal of the illuminated place begin to vibrate in a way that changes color depending on the position of the observer, and this is why the famous emerald green glass of Lycurgus looks red when lit from behind. According to one researcher, archaeologist Ian Freestone of the Institute of Archeology at University College London, the Romans knew exactly what they were doing.

This was proved by the exact proportion of precious metals. According to him, this is an incredible achievement. He describes the glass as too unique and valuable to be sampled. Fortunately, several particles have been preserved. It is in the fact that nanotechnology was actually used 1600 years ago that the uniqueness of the Lycurgus Cup lies.

That is why it is considered one of the most important archaeological discoveries of the twentieth century, as it changes the way many scientists think about the world.