Trakia Foundation: The collection has no reason to be confiscated 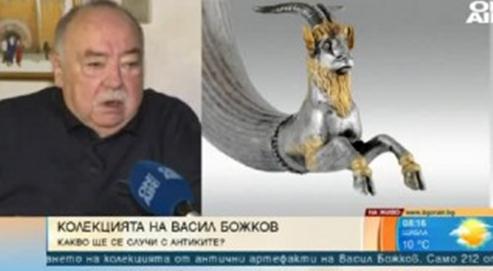 Authorities continue to confiscate antiques from Vasil Bozhkov’s collection. The businessman owns about 3,000 works and artifacts that will be moved to the National History Museum. The Trakia Foundation, which takes care of the management of the collection, said that no one had presented a document justifying the seizure of the valuables.
More on the topic
Banov for Bozhkov’s collection: Nonsense, it has not been seized!
And Rashidov indignant: They take Bozhkov’s antiques in sacks

Trakia Foundation with Vasil Bozhkov Museum is a non-profit legal entity and has existed for many years.One of the main goals of Trakia Foundation is to create a museum to present, engage, publish and study important cultural works. “In 2009, the Ministry of Culture approved our application for a museum and these objects are in this museum. So far, no one from the state administration has presented me with any document with which to justify the seizure of this collection.” said the executive of the Trakia Foundation Kiril Hristoskov on the air of Bulgaria in the Morning.
Trakia Foundation for Bozhkov’s Antiquities: They tried to take them with sacks, barbaric!

He added that he had interviewed investigators, but was not sure if they were properly informed about the state of the collection.

“We have a huge number of objects and artifacts, mainly antique objects, which have been declared to the relevant institutions and on the basis of these declarations the registration procedure is subject. But this registration is associated with an object identification process, which is an extremely laborious and slow process. “, added Hristoskov.

According to him, there are cases in which the identification of an object can take 50 years.

“So far we have published many catalogs, where most of these priceless items are described, analogues are made with world practice. I can not say how many items are registered,” he added to Bulgaria ON AIR.

Registration was done when they received a museum permit, it was a mandatory procedure.