Can you spot a fake antique? 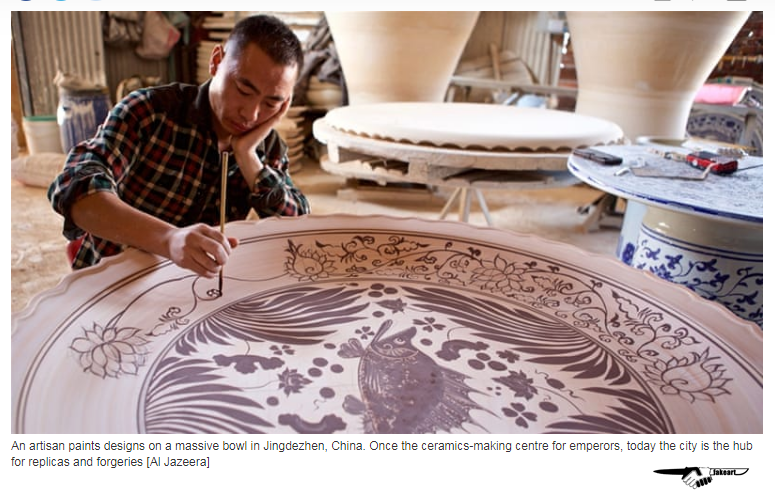 Can you spot a fake antique…..

China’s forged antiques market is booming as the country’s burgeoning mega-rich unknowingly buy them up.

It’s a stormy autumn day in Hong Kong, but above the howling monsoon winds, there is a familiar noise in this Asian financial heartland – the sound of millions of dollars changing hands.

In a packed exhibition hall, some of China’s wealthiest have gathered and are jostling for space as they engage in furious bidding, their eyes fixed on the auctioneer on a podium at the front.

“We have five million,” says the dapperly dressed man, “Now we have six. Do we have seven? Eight million from the lady on the left.”

This is Sotheby’s autumn auction, and on sale are some of the finest Chinese antique furniture and ceramics.

“This is the real beginning; it’s the beginning of a totally new era. Now I think you know China is centre-stage.”

Despite a recent economic slowdown, China is spinning out new millionaires at a rate far outpacing the United States. In 2014, the Asian powerhouse added two million millionaires – a 50 percent increase from the previous year.

And Chow says many of those with deep pockets are turning their attention to “reclaiming a bit of their past” –  in other words, spending big bucks on Chinese antiquities.

The explosion of interest has been followed by a darker development in the antiques industry, however, a wave of forgeries that are flooding the market.

“Virtually 99.9 percent of what you see in the art world is wrong,” says Chow. “Most of what we see  … I get maybe 20, 30 emails jam-packed with images of porcelain landing in my mailbox, and all of it is fake.”

Besides employing a team of experts, Sotheby’s relies heavily on the confirmed history of an item, something called “provenance”, to help to authenticate items.

But Chow says many forgeries are slipped on to the market through “lower-end” auction houses.

Just down the road in Hong Kong, we join Mason Wang, a dealer and collector for 40 years. He is at a preview session at a smaller venue, hunting for deals.

Instead of guaranteeing the legitimacy of an item, most auction houses offer sessions before an auction to allow the public to inspect the pieces on sale. It is up to the buyer then to determine if a piece is real or fake. There are no returns.

“This one doesn’t look right,” says Wang, as he inspects a vase from the Song dynasty. “The shoulders are much larger than the base.”

In half an hour, Wang finds half a dozen items that he suspects are not authentic.

The problem, he says, is that there are few non-invasive scientific tests that can definitely prove the age of an item. That leaves experts relying on their knowledge of the weight, colour and feel of an object. At times, he says, even the experts disagree on whether an item can be trusted.

“There are great forgeries out there these days,” says Wang. “While we can sniff out most of them, there are some that can fool even the best of us.”

The fakers and forgers

When it comes to ceramics, the epicentre of forgery production is in a town called Jingdezhen. Located in southeastern China, Jingdezhen has a long history in the porcelain trade. For centuries, emperors sought out craftsman here to create items for the imperial court.

More than 100,000 people in the city are still employed by the ceramics industry, spinning out replicas from bygone eras.

Replicas are legal. Trying to pass off a new piece as an antique is fraud.

To find the forgers, we enlist the help of William Tseng, a former banker who has spent a fortune collecting ceramics.

We arrange to meet an insider who has promised to introduce us to the best forgers in the city. A man greets us outside a compound in the city’s narrow backstreets. We soon learn that he is a government official, working for the relics bureau.

“Here in Jingdezhen, we make really good Ming and Qing era fakes,” the man tells us as he takes us to meet some forgers

With a magnifying glass, Tseng looks over the blue vase. He finds it is of such quality that it would fool most people. “It’s truly amazing. From the glaze, the colour, the shape, I can’t tell the difference with the real thing.”

The brothers go on to tell us how a US collector commissioned them to create the fake. They used an original from the collector’s estate as a reference.

“We made three or four copies. And he took the best one. The collector then simply swapped his original for the fake, and put it on auction as the real thing.”

That apparently is how many of their clients operate.

“We have many of our items in auctions worldwide,” says another brother. “With this latest one, we made $80,000.”

But with art prices surging, the forgers are no longer content with a fixed price. Now they want a cut of the profits from the auction sale price.

Back in Hong Kong, Nicolas Chow, the Asian art expert for Sotheby’s, says that greed is fuelling the forgery industry – not only on the part of forgers, but also of collectors.

“You have to understand that if someone shows you a piece and goes ‘OK, Sotheby’s sold this one for a hundred. I’ve got the same, I’m selling you for 20’, it’s greed to try and think that you are going to get this extraordinary bargain.”

Mason Wang, an 84-year-old art dealer and collector, blames all facets of the antiques business – from collectors who don’t do enough research before buying, to auction houses who keep silent about items they know are fakes – on the Chinese government which, for the most part, does not go after “antique fraudsters”, despite it being illegal.

“To stop that happening you need to open up everything, you want to have a transparent society. And, then we establish order, we establish law to punish people who cheat,” says Wang.

But as the frenzied pace of buying continues, Wang doubts if there is truly a will to clean up the market. He, for the most part, has stopped buying items. “There is just too much out there that you can’t trust,” he says.

It truly is a case of buyer beware.