Bulgaria! A find in the baths of Varna – a marble slab with a poetic inscription 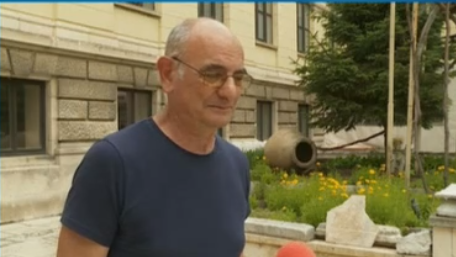 A marble slab with a poetic inscription is the latest find from the excavations of the third, late antique baths, discovered in Varna. Archaeologists describe it as extremely valuable, as the discovery of new written monuments from that time is rare.


The find is from two days ago – in several lines the inscription tells to whom the city owes the construction of public baths and invites everyone to enjoy their hot pools.
“For us, it is a very beautiful inscription, because it is in poetry, with a change of metric step, exactly in the order of classical Greek poetry, but from a later era, from late antiquity … Hurry nereids, come and take a bath. in the bathroom, come, blessed goddesses, this bathroom was built for you – bathe in it and dance! “, commented the archaeologist Alexander Minchev.

The name of the donor has not yet been specified, but his title is clear, which corresponds to the Roman “virklarisimos” – at that time it was given mainly to members of the senate and people of very high state rank. The plaque is literally a new page in the history of the city.

“In principle, the science of history and archeology are based on two main foundations – one is the written sources, and the other are the material monuments that are discovered. And I must tell you that in general the written sources are known. They have been studied many times, interpreted So, each new written monument that is unveiled is a completely new page in history – in the case of Odessos and the history of the construction and use of baths in late antiquity, “added Assoc. Prof. Valeri Yotov .

Fortunately, landowners and investors are helping to socialize the surveys. And archaeologists hope that this part of the late ancient city will one day become a kind of open-air museum.