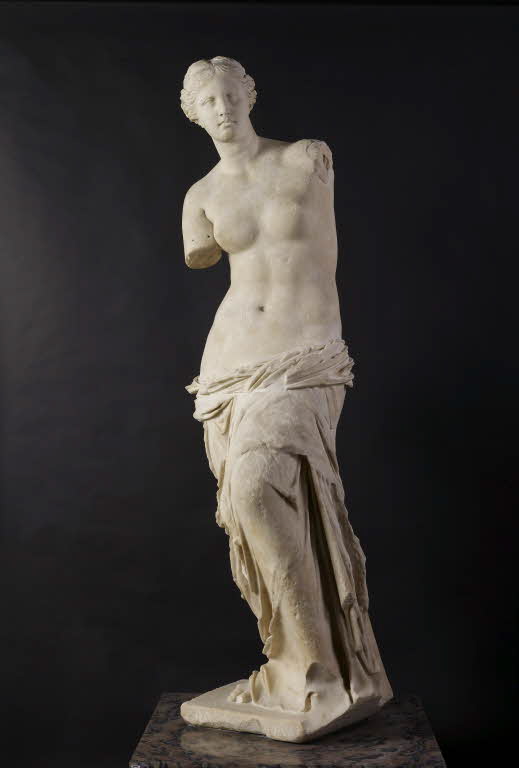 The statue of Venus de Milo was discovered on April 8, 1820 among the ruins of the ancient city on the Greek island of Milos. Photo: Louvre

Venus Miloska, born of foam for the second time 200 years ago
Aphrodite is a goddess of love and beauty, the personification of eternal youth, a traveler on the seas. Initially, she was even perceived as the goddess of the sea, sky and fertility. Its name from ancient Greek means “born of foam”. The cult of her was spread throughout Greece and all the temples dedicated to Aphrodite were visited by young people who longed for love.
That is why ancient art abounds with images of Aphrodite – naked or shyly wrapped. Many cities commissioned her statue for their temples. Unfortunately, most of them have not reached us – wars and earthquakes on the peninsula have destroyed entire cities.
Milos is a small rocky island in the Aegean Sea, which adopted Aphrodite as its protector. The symbol of the island is the apple, which is also an attribute of the goddess. The month dedicated to Aphrodite, according to ancient Greek mythology, is April. That is why it is a miracle that the most famous statue of this goddess was discovered on the island of Milos in April.
In 1820, the peasant George and his son plowed their small fields near the ruins of an ancient theater. At that time, the locals did not pay much attention to the many historical artifacts that surrounded them everywhere. But this April, George pushed the plow a little deeper. And it hit a rock. These were remnants of ancient walls. The worked stone was valuable at that time as a building material and Irgos tried to dig up his find. A little later, a pit opened before his eyes, in which lay the statue, along with two small statues – hermes and a few pieces of marble.
The peasant knew that foreigners in Greece were interested in ancient finds and could buy what they found for a lot of money. So he went to the French consul and offered him the sculpture. The consul was not very well versed in art history, but he knew full well that the French government wanted to replenish the Louvre’s collections. He sought the opinion of the commanders of the French ships moored in the local port. The officers were divided. Some thought the statue was nothing special, others said it was exceptional. At that time, the ship La Chevrete, specializing in hydrography, arrived at Milos. Midshipman Dumont-Durville of the crew, a future admiral and explorer of Antarctica, immediately realized how valuable the find was. Because of his report, the French government ordered funds to be allocated for the purchase of the statue. But Ikonomos Verki, the governor of all the Greek islands at the time, soon learned of it. Vergi insists that Milos sell Venus to Turkey.

The story becomes worthy of a play. When the French ship arrived with the money, the statue was already loaded on a Turkish sailing ship. The French began to pursue her. They overtook the Turks and managed to bargain for the upper half of Venus. Much later they bought its lower part.
The statue – and more precisely its fragments, which were later restored – was brought to France and presented as a gift to King Louis XVIII.
For a time, the king tried to keep it a secret because Turkey treated the removal of the statue as piracy. Soon, however, rumors of the beautiful ancient creation spread around the world. Venus was placed in the Louvre and welcomed its first admirers on May 7, 1821.

The ambassadors of all countries are invited to the opening ceremony. Also present was the Greek diplomat, who was powerless to see one of his country’s most beautiful possessions on display in France’s largest museum.
At the insistence of Louis XIII, Venus was declared the work of Praxiteles, the most famous sculptor of antiquity, although it was later established without any doubt that the sculpture was created much later – around 120 BC. There are claims that the statue was sculpted by another great master – Scopas. But thanks to the diligence of one of the researchers, who made sketches of the sculpture and the fragments of a marble pedestal brought with it, an inscription was found:
“Alexander, son of Menid of Antioch, did this.”
However, art critics are still arguing. Some suggest that Alexander made only the pedestal. Others tend to think that the signatory is the first restorer of Venus Miloska, suggesting that he changed the position of her hands.
The mystery of where Venus Miloska’s hands disappeared still excites connoisseurs and researchers. Describing the sculpture, Durville says that “in his left hand he holds an apple, and with his right he holds a beautifully draped belt, carelessly falling from his thighs to his feet.” However, the son of the consul in Milos speaks of only one hand – the left.

Whether the hands were broken in the memorable clash between the French and the Turks, or earlier, is still a matter of conjecture. However, according to experts, the statue lost its parts much earlier, judging by the patina on the remains.

The controversy over what the goddess held in her hands continues. According to some – an apple, because of the myth associated with the bet between Hera, Athens and Aphrodite, because of which f