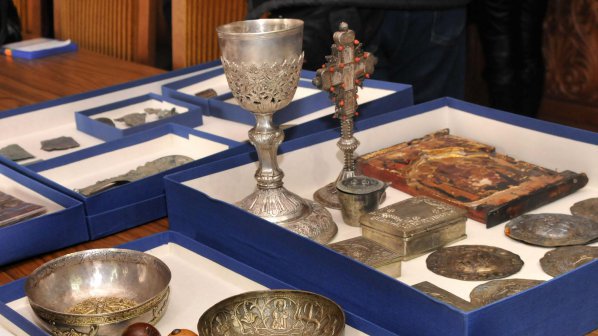 The treasure hunters earn 500 million leva a year from digging and selling Bulgarian antiques. Cultural and historical values are exported abroad, where they are legalized and appear at auctions and online auctions. There, their price jumps hundreds of times, Monitor reports. One of the most striking cases is Byzantine dishes, sold in Bulgaria for 30,000 leva, and then traded for several million pounds. Only items that have been sold through the eBay e-commerce site are worth over BGN 30 million. This was announced by Dr. Shtereo Nozharov of the Forum Association, which deals with the preservation of the Bulgarian cultural heritage. According to a one-year study, which he and his team did, there are about 5,000 professional treasure hunters operating in our country who have the technique and knowledge to retrieve valuables.


“According to experts, 70 percent of our territory is already plowed. The fight is now on for the remaining 30 percent. Our goal is to protect them. Currently, in a state of recession, Bulgaria is earning BGN 1 billion a year in cultural tourism, and we have the potential to make that profit five times as much. However, the treasure hunt in Bulgaria is too large. In addition to professionals and middle-level dealers, there is a very large percentage of people who simply feed on it, ”said Dr. Nozharov. He explained that in the Vidin region, for example, an excavated antique coin is being sold for 10 leva. Most often it happens at the grocery store where people buy bread with the found. For his part, the shopkeeper sells it for more money to the local dealer, he takes it to the next level. The main path of values was to Germany and Austria, where antiquities were easily obtained by documents.

They then found themselves in the United States, Canada, Japan and even Russia, where rich collectors bought them. Thus, one coin, which was traded for one loaf of bread and two yoghurt, ends up in a private collection for several thousand euros.

Bulgaria has recently signed a memorandum with the United States that the Department of Homeland Security will return to us any antiquity for which the petitioner does not have special permission from the Bulgarian government. In June, DANS managed to return over 3600 antique items, which were auctioned in the Italian city of Verona.

“Another problem we face is that much of the international trafficking of valuables goes through Bulgaria, because in our neighboring countries the laws are very strict for this type of crime. In addition, we are the third richest country in antiquity in Europe after Italy and Greece, and this is attractive to people in the gray sector, “Nozharov said.

According to statistics, there is one prisoner sentenced to prison each year in Bulgaria, which further stimulates this type of crime.

This is Bulgaria. This is the European Union