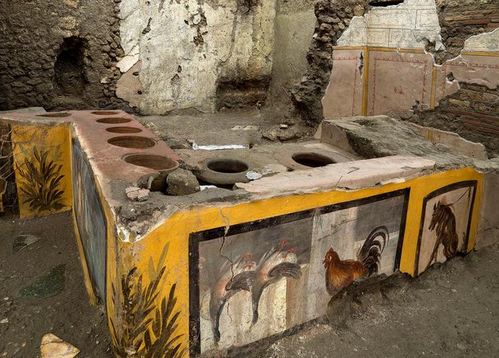 They found a perfectly preserved food pavilion in the city of Pompeii They discovered an incredible new find in “dead” Pompey A new unique find was made in the ancient Roman city of Pompeii, which was destroyed during the eruption of Mount Vesuvius, by a group of specialists, which in addition to archaeologists include biologists, zoologists and volcanologists. As the director of the Pompeii Archaeological Park, Massimo Ozan, said on Rainews24, this is a street pavilion that sells food, both raw and ready-made. According to Ozan, the opening of such an institution is not new in itself, because in the “dead” city, where excavations do not stop, there are already known about 80 such pavilions, which were common in Pompeii. “But this pavilion is special because we were able to restore the food that was sold there. In addition, the murals, which also describe the products on offer, are preserved on the countertop, ”says Ozana.

According to him, another unique find makes it possible to restore the picture of life almost two thousand years ago. “We had an idea of the tastes of the food of the ancient Romans, but now we are able to understand that the Pompeian chefs offered incredible mixtures of fish and game. “Meat from different animals was added to fish dishes, often mixing different types of meat. The consumers of this type of cuisine were mainly the common people, not the aristocracy, who were served far more complex dishes, “explains the expert. In this way, zoologists have been able to identify duck meat, pig bones, sheep and goats, as well as birds and snails, thanks to the material preserved under the lava. The director expressed hope that the pavilion would be open to tourists until Easter (in case museums closed due to the coronavirus pandemic open).

Completely buried under a layer of lava and ash, the city was first discovered in 1592. A plaque with the inscription “Pompeii” was found there almost 100 years later, in 1689, but then it was believed that the ruins belonged to the villa of the commander and prominent politician Pompey the Great (106-48 BC). .

The excavations of Pompeii continued in the XVIII and XIX centuries. In the course of the long history of the study of the ancient Roman city, the principles of modern archeology were formed, which arose as a “treasure hunt” of antiquity. Buried alive under the lava, the city became for scientists a kind of encyclopedia of the way of life of the ancient Romans, which learned a lot through the excavations in Pompeii. One of the latest sensational discoveries is an inscription that confirms the version of the wrong date of the fateful eruption of Vesuvius: this may not have happened on August 24, as is traditionally believed, but in October 79. The excavations continue to bring surprises: only in recent months have important discoveries been made, one of which is the body of a resident who died in the eruption with a preserved crystallized brain.