The broken amphorae of Monte Testacho in Rome 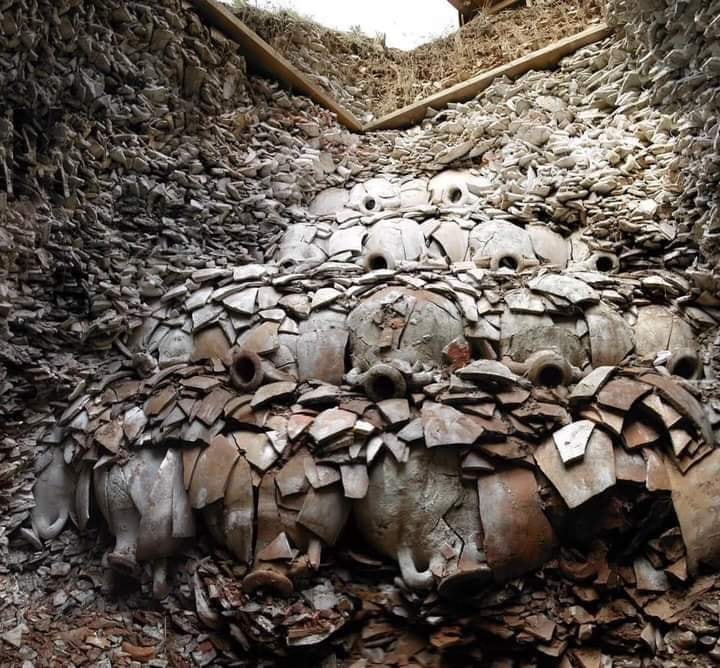 The broken amphorae of Monte Testacho in Rome
Ancient Roman “cemetery” of fragments of broken olive amphorae. It is estimated that the hill contains the remains of as many as 80 million amphorae with olive oil. Rome, 1st-3rd century AD Amphoras were used to transport olive oil from various parts of the empire. They have only been used once, as the remnants of oil in them ran out quite quickly and would spoil any new oil placed in them.
Fierce battles were fought in this place. Carnivals were celebrated without restraint. From here Garibaldi defended Rome, while wine was aged in the caves below. It has been a favorite place of picnic fans for generations. But this hill in Rome is not one of the seven for which the city is famous. In fact, Monte Testacho is nothing but a mound of ancient garbage.

For more than 250 years, the ancient Romans methodically piled up their broken clay amphorae, little by little creating the hill of Monte Testacho. It turns out that it is just an ancient dump.
Monte Testacho is located right next to the ancient port on the Tiber River and next to the warehouses where imported goods were stored – such as olive oil.

Yes, olive oil was produced in the Italian lands, but the Romans apparently consumed much more than they could produce. Olive oil came from the lands of today’s Tunisia, Libya, Spain in clay pots. About 80 million of them, broken into pieces, today form the 35-meter hill (plus another 13-15 meters below the modern level of the city).
The excavations of Monte Testacho show that the place was not just a dump, but was purposefully created as a series of terraces.

After the decline of Rome, the area of the hill was abandoned. Decades later, it began to be used for lavish carnival celebrations before the start of Easter Lent. These tumultuous entertainments included a lot of food and dancing at the base of the hill, as well as carriage races powered by pigs and bulls (which, not surprisingly, rarely ended well for the participants).
In the week of Easter, Monte Testacho was the place where they reconstructed the way of Christ to Golgotha (today there is still a cross at the top).

About 150 years ago, Garibaldi stood on the hill in an attempt to stop the advancing French army. Around the same time, they began burying wine in the foundations of Monte Testacho. It was not until the 1930s that the modern neighborhood began to take shape there. For a short time the hill was turned into a beautiful park with a fountain and alleys, but soon after it was abandoned again.
Today it looks like a grassy hill with mini Golgotha on top. But you already know what’s underneath.