Thracian gold ring with the image of a resting athlete. 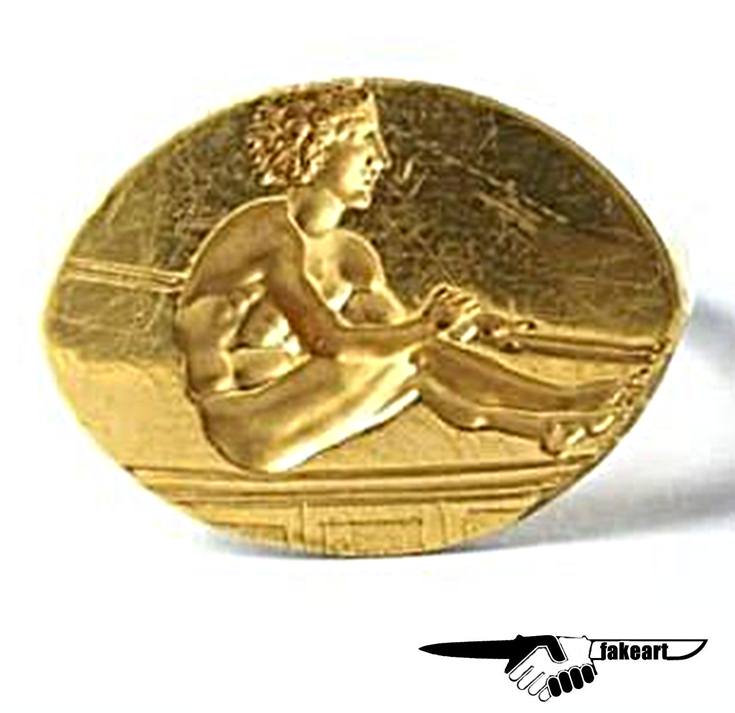 In the permanent exhibition of the National Archaeological Museum in Sofia can be seen gold signet ring from Svetitsa Tumulus, found near the town of Shipka, Stara Zagora Region from late 5th c. BC. The ring belongs to grave goods found in a sarcophagus-like grave in the Svetitsa Tumulus. The archaeological excavations were conducted in 2004 by a team led by Assoc. Prof. Dr. Georgi Kitov. The grave is situated in a pit with a bottom laid with stone blocks. The walls are constructed with finely cut stone slabs arranged in lines. The grave is covered with six trapezoidal stone blocks, thus resembling the shape of a sarcophagus. The grave goods are rich, including gold funerary mask, bronze and iron weaponry and body armor, silver, bronze and ceramic vessels. They clearly indicate that a prominent representative of the Thracian elite was buried in the grave.

On the oval plate of the ring a young athlete at rest is represented in negative (carved image), in profile to the right, the upper body is in three-quarters frontal position. He is seated with shoulders slouched; the upper body is leaning slightly forward. The hands are laid over the knees, the left one is holding two javelins in a horizontal position and the right one is gripping the left wrist. The legs are extended forward with the knees slightly bent; the ankles are crossed. The hair is curly, waved back from face. The face profile displays massive regular features. 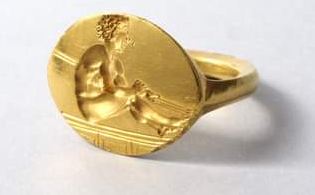 The muscles of the body are detailed. The entire posture of the relaxing figure is skillfully rendered. The realistic representation of the crossing hands and feet makes an impression. The athlete is seated on the ground marked with three horizontal incised lines; rectangular elements arranged in line and matted by roughening in the middle are depicted below. These elements resemble the construction of rusticated stone blocks, profiled in the upper part. They probably represent the architectural environment of gymnasium.